After a day in the way too hot sun and a lack of appetite you just gotta kinda force the food in. And there is no better way then stopping for fifties diner type stuff.. Well since you are on 66 right?????

For the past year Maia and i have been haunted by Monte Carlos.. they show up in our pics and we see them on drives and when with other we point them out! Especially when we take Kelly out! Kelly and Maia and I continued with our luck of seeing Monte Carlos this whole trip. And now Mike was seeing them everywhere too!

We headed up to Wilmington to hit the last part on our 66 trip before heading to Channahon. I was determined to find the Gemini Giant.. Ok so we got a we bit turned around and Siri does not make u turns and we turned too soon and had to make a 4 sq mile detour back to the street we were on!.. But we found it.

It was not where we thought it was!

And as we looked to the north a rainbow peered at us from the clouds.. Eureka my dear we found it!

As we pulled around the lot a Monte Carlo was pulling in.. Then one passed us. and after we took the pics we drove down a block to take a pic of the wall painting someone had done of a Seurat painting , guess what was parked next to it.. a Monte Carlo.. mike and I busted up laughing.

As we drove home that night we were followed by one for ten minutes. 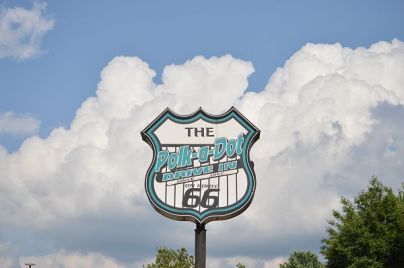 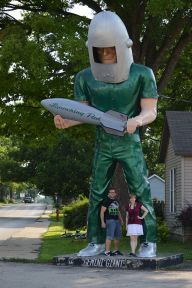 30 Jun This entry was published on June 30, 2014 at 10:51 am and is filed under Uncategorized. Bookmark the permalink. Follow any comments here with the RSS feed for this post.

Older: Getting your kicks with my pics on 66, part 2
Newer: Sitting by the dock of the lake